With an increasing Asian population in New Zealand, yum char restaurants are not exactly a novelty in Auckland. What exactly is yum char and how do you eat it?

Yum char literally means ‘’drink tea‘‘ in Chinese,  and is referred to a process of.. well drinking tea and sampling a selection of sweet and savoury dishes around lunch time. Best way to enjoy it is with a group of people, because first of all, it is cheaper that way, and second of all you get to try more dishes since everything you order comes in quantities of three of four. It is also a good idea to bring someone who knows either the dishes or is a yum char regular to advice on what food to order. My companion was Chris, second generation New Zealander from a Chinese family. He was very helpful indeed, but manages to embarrass me plenty of times by referring to me as a foreigner and making sarcastic comments about taking a picture of every single dish we ordered. 🙂 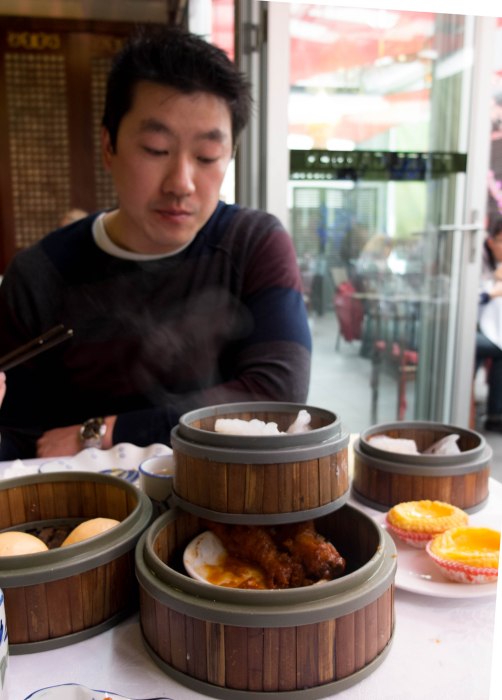 What happens during yum char?

Choosing a good place could be a bit daunting, so one way to tell if a restaurant is any good, is to look at how packed it is. Usually a good chain/restaurant attracts a loyal following, which in reality means that you might have to wait in line for a while.

When you get a table, depending on how many people are in your group, you’ll be presented with a basic selection of tableware. Typically, it includes chopsticks, a little bowl for food that you’ll take from the main serving dish and a teacup. Green tea costs a dollar or so per serving and according to some people, helps your body to absorb less fat from the food. Hence, it is advised to drink plenty of tea with your meal. 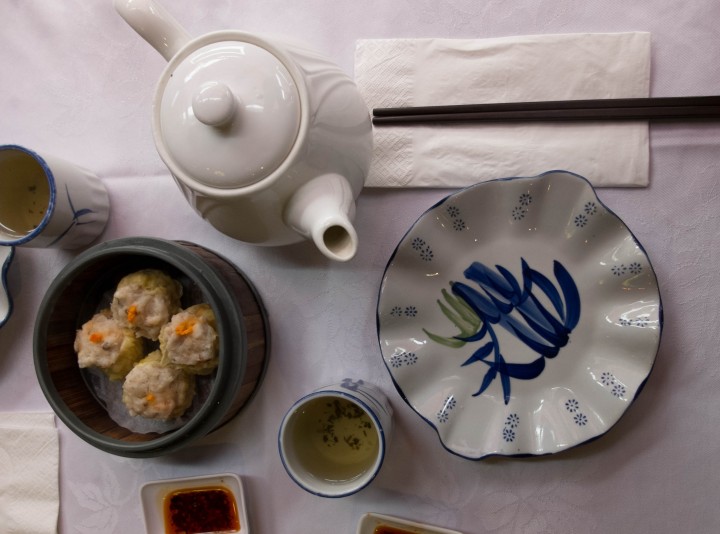 Insiders tip – if you are out of tea, place the lid on the side. Waiter will come around with a jug of hot water and refill it without asking. Like shown on the photo below. 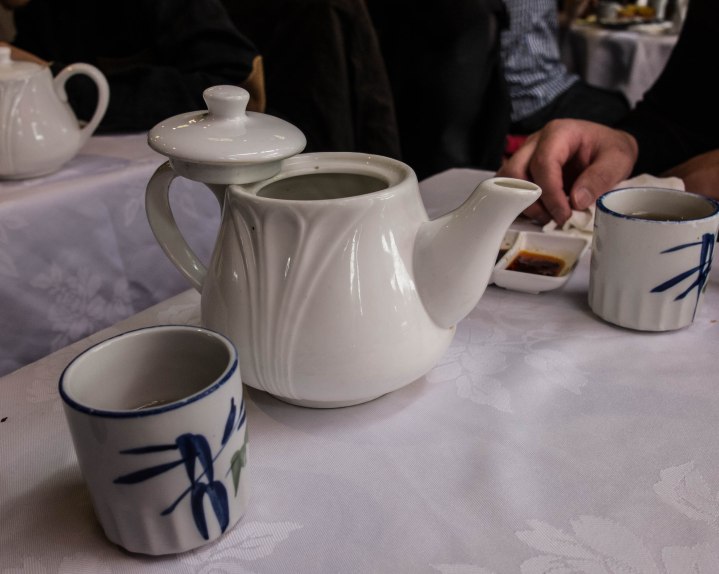 Once you are seated, you just have to relax and wait until a waiter walks by with a tray of food or wheels past a trolley with dishes. You tell the waiter what you want, and he or she will leave a serving basket of whatever you choose on your table and mark it on your card. Usually you are only allowed one bill table, paying before you leave, based on the order card. Price varies based on the type of dishes you get, but usually around 4-6 nzd per plate. It cost two of us $50 today, but let’s just say that we ate a wee bit too much! 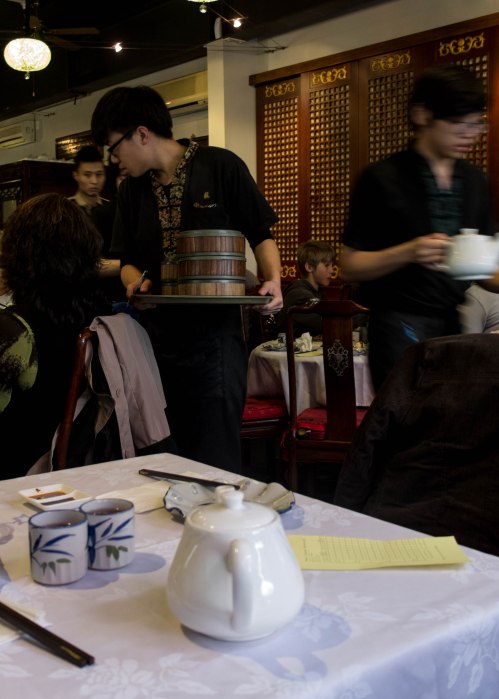 What kind of food can you expect?

My usual selection includes pork buns, dumplings, chicken feet and green tea ice cream. I make an effort to try a new dish every time I go to yum char, so that’s how chicken feet came about a few years ago. I used to be a hater and had no idea how one can enjoy them… but once I actually tried chicken feet, I haven’t looked back. They look odd, are fiddly to eat but taste damn good.

According to Chris, most food served for Yum Char is what you call ‘’traditional Chinese” dishes, but since it is becoming more and more mainstream, the menu now includes food for “white people”, such as steamed veggies, BBQ pork and other things that are usually offered for dinner. After some people watching, I can confirm that he is right, and some dishes are mostly ordered by non-Asians. 🙂

Our selection from today:

For some reason, this is the dish we always start with. Shumai, also spelled as siu mai or shaomai is made mostly (again, according to Chris) from minced pork and prawns wrapped in thin layer of dough. Bringing YUM to yum char. Doesn’t look very appetising on the photo, but tastes beary good. 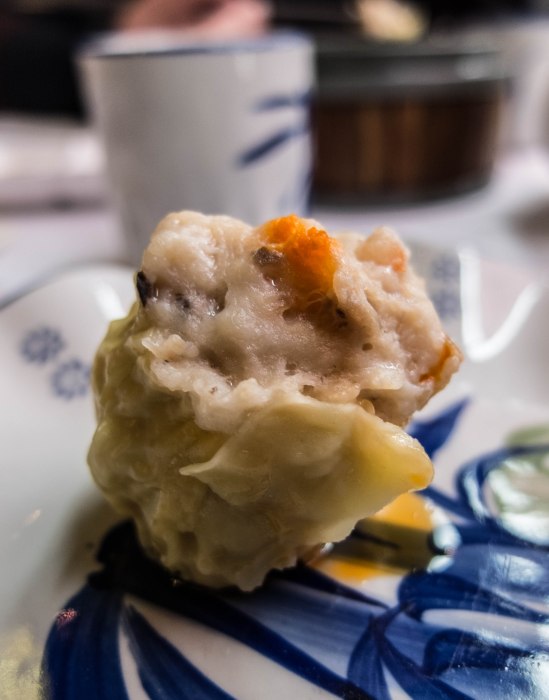 There are also yummy pork buns, or Cha siu bao, you can’t go wrong by grabbing a tray of those. Dough on the outside is sweet and soft, with juicy meat on the inside. 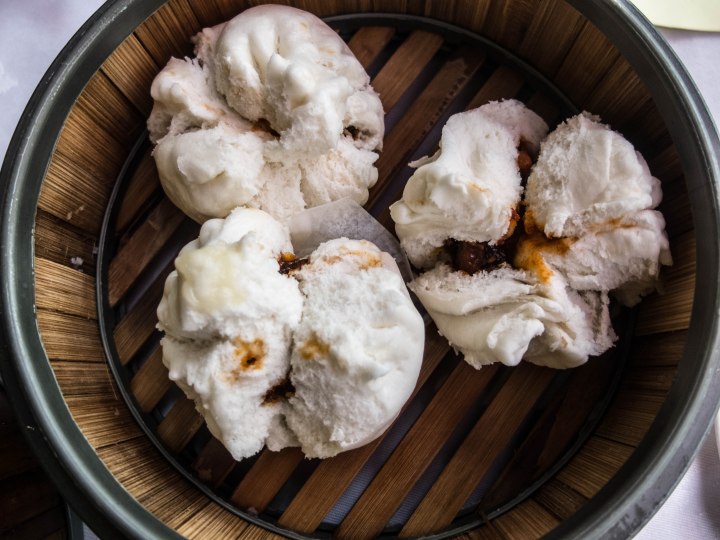 My favourite dish – chicken feet (fung jiao). Usually people have a love or hate relationship with chick feet… mostly hate it of course. Truth is, they really do taste like sauce and chicken skin. I love both, so apart from being a little awkward to hold with chopsticks, I have no issues. 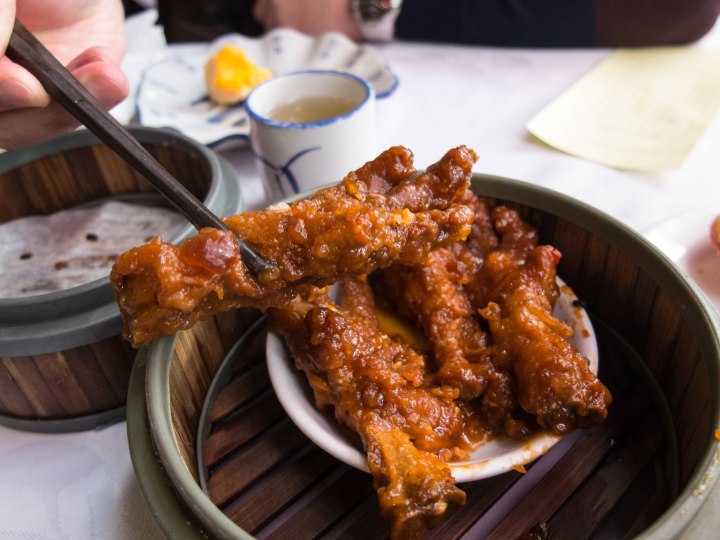 BBQ Pork is one of those “white” dishes, so we were not allowed to order it hehe. Trying to fit in a Chinese restaurant, being blond is a different story. 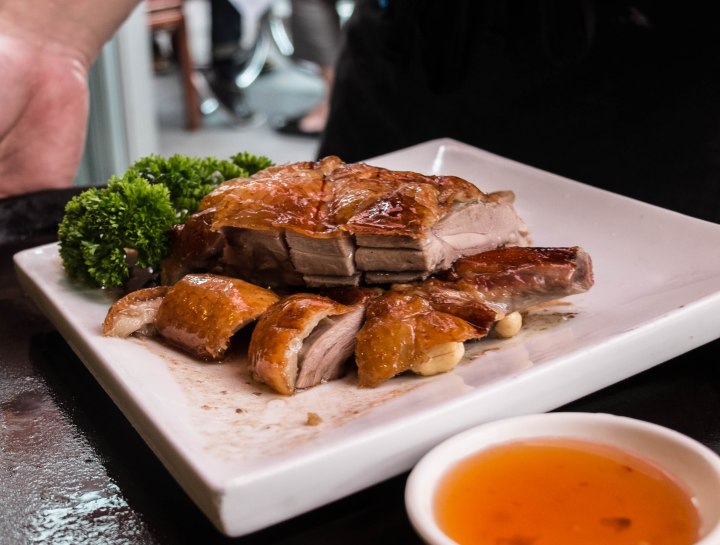 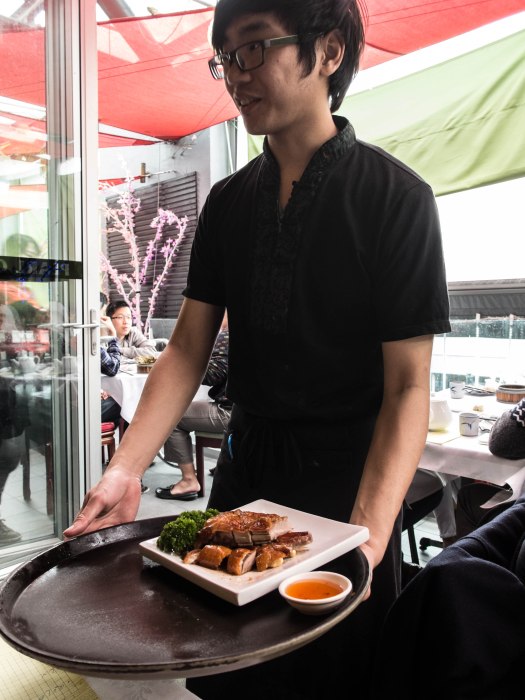 Dumplings. Let’s just put them in one big category for now, as there are so many varieties. Typically they contain prawn, veg, pork, dried shrimp, and wrapped in a thick dumpling wrapper, made from glutinous rice flour. Use of rice flour makes them almost see-through, and a little rubbery. Dumplings are usually served with a small dish or soy sauce and chilly oil, which I successfully managed to spill all over the white table cloth. 🙂 Today we tried cashew dumpling.. very strange indeed. 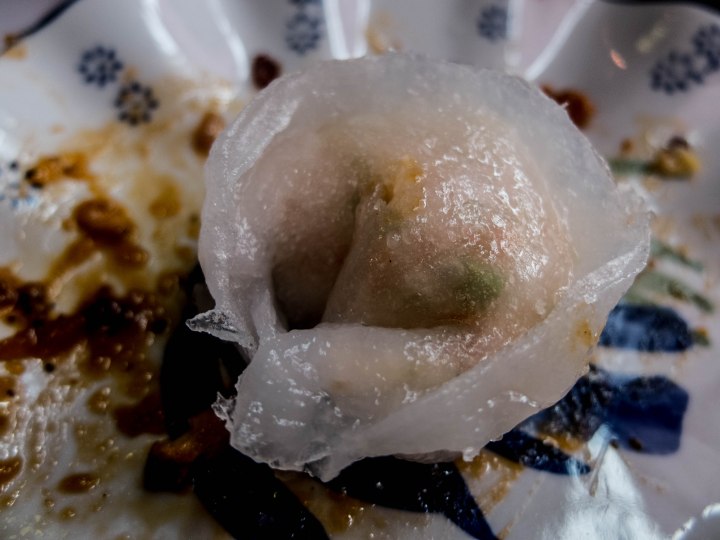 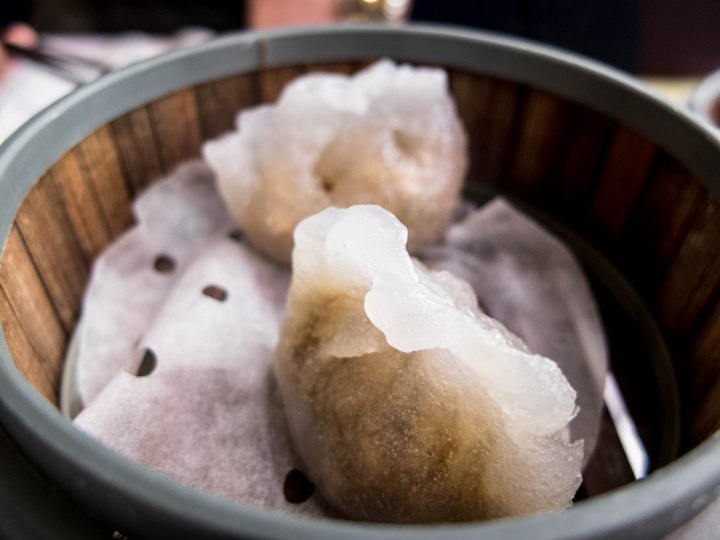 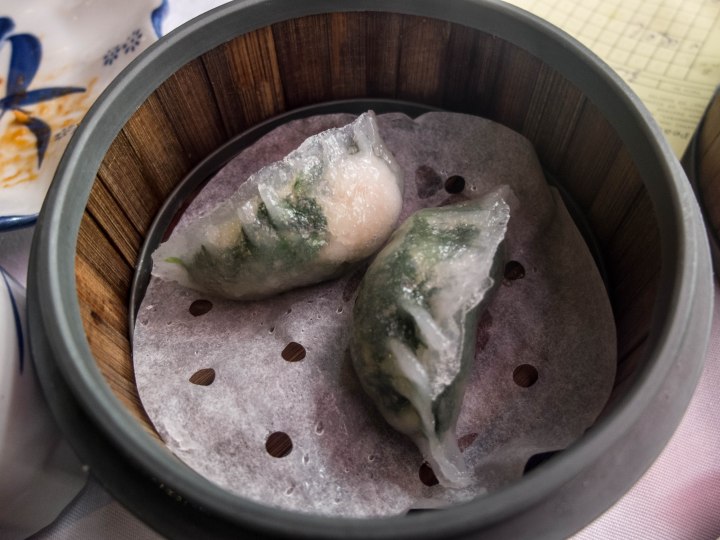 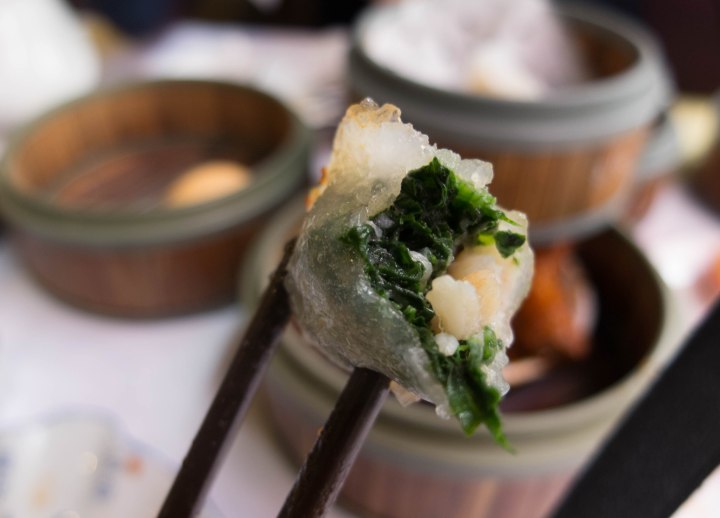 For dessert I usually get either ice cream wrapped in rice flour (moochi type), but today we tried custard bun and eggs tarts.

Lai Wong Bao aka custard bun, is basically like a steam bun with a sweet buttery custard filling. A little bit too sweet for my liking, a favourite of many. If filling didn’t taste so buttery and sweet I would be more than happy to enjoy a couple. 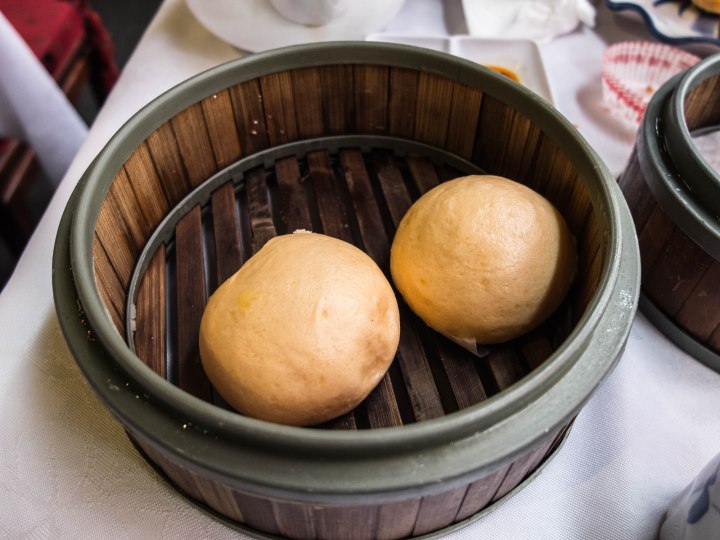 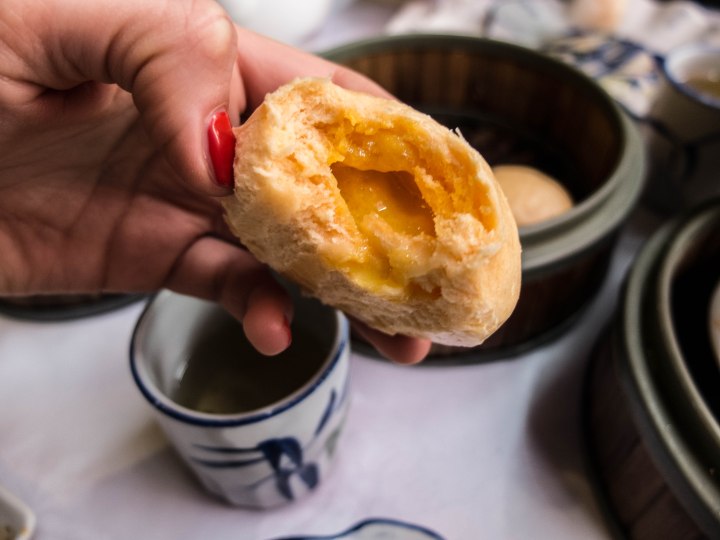 And the last dish of the day was… egg tarts! Traditionally referred as daan taat (I have no idea how to say that), is made from flaky pastry and filled with egg custard. They evolved from Portuguese egg tarts, but of course taste a little different. I could munch on them all day long! Google tells me that there are different flavours such as chocolate, green tea and even bird’s nest (no surprises there). 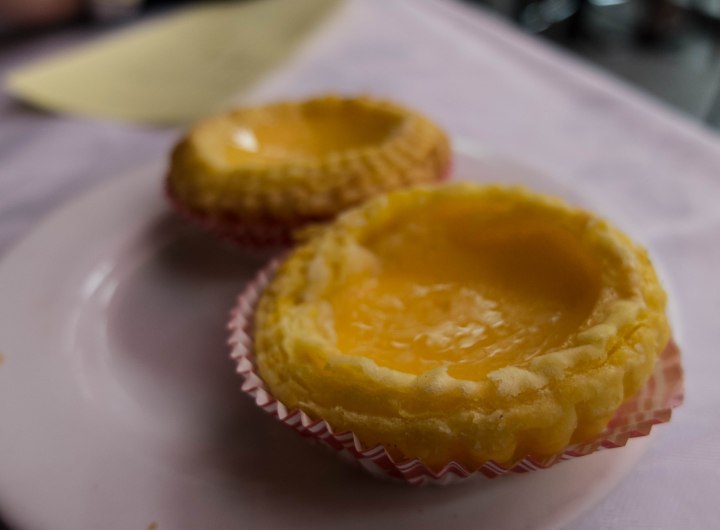 Nearly an hour and a half later, we rolled ourselves out of the restaurant. Until next time.. 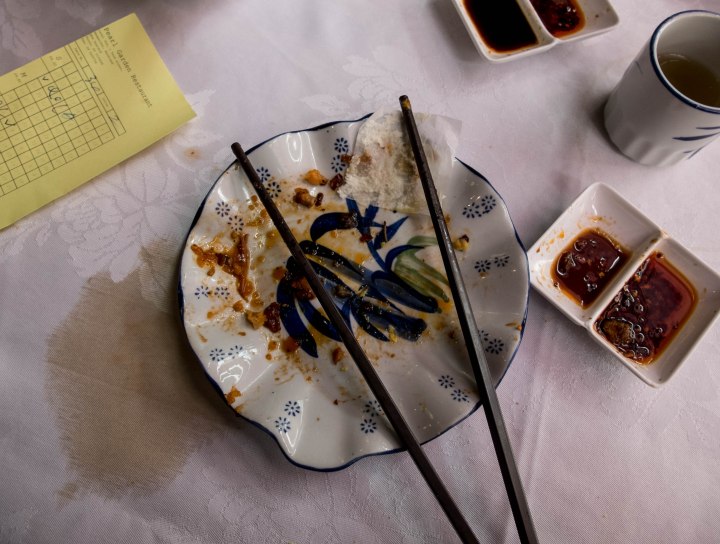